Why You Should Outsource IT Services to Lithuania

Here we are going to prove to you, why Lithuania is the ultimate choice of outsourcing IT teams or single employees. Read until the end and you will see!

IT outsourcing is a complex term comprising of IT (Information Technology) and its outsourcing or hiring people, enterprises or teams to manage specific tasks or objectives. Combine the two, and you get a service dedicated to the external management of IT systems, technologies, software or app development etc. However, what does a tiny Baltic country of Lithuania with around 2.9 million people has to do with the regional IT outsourcing trends in Europe or the whole world? It turns out – a lot.

The History of IT in Lithuania and The Current Situation

In mid-2015, ZDNet labeled Lithuania as a new and emerging ‘force in IT’. After the fall of the Soviet Union in the years 1990 and 1991, substantial new business opportunities arose in the Baltic Region. The best-developed and most affluent region in the former Soviet world, Baltics instantly became a lucrative place to invest for Scandinavian, British, American, Russian and Western European businesses. Seemingly everyone tried to join in. However, for about roughly 20 years, between 1990 and 2010, not much happened in terms of technological breakthroughs and advancements. Slow and steady numbers showed colossal upside potential for Lithuanian technological and IT sectors, but government involvement was minimal, and thus foreign investment remained reserved, singular, not supported.

Big Mini-Boom in IT Sector

After the economic crisis of 2008, the IT mini-boom began, and Lithuania started to emerge as a hub and hotspot for affordable and very qualitative IT sector labor. Huge brands like Barclays, Google, Nasdaq, AIG and many others jumped on the bandwagon and set up remote offices or flat out built IT service centers which were a big spark to the jump start of not only the IT sector but the entire economy of Lithuania.

Here we are now, in 2019 and followed by a sizable government encouragement, introduction of the Euro, recognition as the country with the world’s fastest public Wi-Fi, arguably the best laser-building infrastructure in the planet and even launching a domestically built satellite into space – technological and IT sectors are very successful in Lithuania. However, what about trends for this sphere? More specifically in the area where it all began for this Baltic country – IT outsourcing. Let’s dive a bit deeper into the IT outsourcing trends for Lithuania.

Who Outsources in Lithuania?

If we take a look into recent data (from 2017), most foreign investment into Lithuania’s private sector comes from:

These countries are the leading investors in the Lithuanian market and see it as a great market to realize some of their supply management, distribution or IT solutions. The capital Vilnius and more recently, the second-largest city in the geographical center of Lithuania – Kaunas along with the port of Klaipeda is the primary locations where those “outsourced jobs settle.”

The graph below illustrates how do those jobs distributed amongst Lithuanian cities: 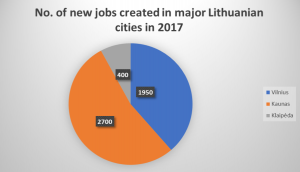 In terms of IT, experts speculate that around 35 to 40 per cent of these new jobs are allocated to IT specialists. It is a considerable number, especially for a country where only slightly upwards of 1,5 thousand IT specialists graduate yearly. Combine that with a national reach of the local employers, and you can see why employers in Lithuania see IT students as being so attractive to hire. Foreign investment and IT outsourcing from abroad see tons of encouragement from the local government since they compensate their employees better than most local businesses, so there is a harmonious and stable environment for IT outsourcing and the future growth of this sector.

Why Do Companies Outsource in Lithuania?

Mostly because of the affordability of high-quality labor. Since Lithuania only has a median wage of around 880USD. However, salaries in the IT sector are usually slightly more significant with the median hovering around the 1300-1450 USD mark. All in all, this is still a small number when compared against the United States or Western Europe; so foreign investment into IT services does not seem to be ending anytime soon.

Great for Lithuania because the IT sector with regards to foreign investment accounts for more than 6 percent of the country’s yearly GDP (upwards of 3 billion USD). Also, since the Lithuanian economy can persist in constant growth as well as a stable government, foreign investment only increases every year.

There is a small hidden gem for any medium and large-sized businesses in Lithuania that is worth knowing about. Near the two cities of Kaunas and Klaipėda, you can find a couple-hundred hectare sized areas of land, labeled LEZ (laisvoji ekonominė zona or the Free Economic Zone). These areas are dedicated to businesses and see terrific encouragement from the local and central government. How they work is marvelous yet truly simple. If you start a company or business in the LEZ and employ no less than 20 Lithuanians or permanent residents of this country – you are exempt from paying any taxes for six whole years. Significant opportunities for both upstart and well-established organizations from all over the globe.

One US businessman, named John Naisbitt said that “Trends, like horses, are easier to ride in the direction they are going”. Good point, because in business, trends work a bit differently than to those of fashion. In the IT outsourcing sphere, we can outline a few key factors or trends for Lithuania and the rest of the world, respectively.

Outsourcing IT Trends in Lithuania

Lithuania sees further and rapidly increasing foreign investment in the IT sector. From the perspective of IT outsourcing, there is a notable upscaling in small enterprises from Scandinavia and the United States who establish small or medium-sized remote offices for IT solutions. There are also major players from Europe, Canada, other countries as well.

They explain such a decision based on the fact that Lithuanians are very skilled workers, wield the English language as a potent weapon and employment here is much more affordable for the business rather than abroad. Companies claim to save anywhere from 30 to almost 78% IT-employee compensation. Even though there is a difference in time zones with the U.S., more and more IT offices in Lithuania that service U.S. based customers, are working around the clock.

There is an increasing trend for cybersecurity and with more emphasis put on copyright and related regulations and laws by the EU, more IT jobs from the public sector could be outsourced into almost every member state, including Lithuania. In the same regard, look for VPN service providers to have a significant increase in size thus opening more than a few offices in Lithuania or expanding significantly.

Cryptocurrencies are amongst other very successful IT market segments in Lithuania. Monetha, BitDegree, to name a few, are crypto-based projects and startups from Lithuania that could see significant foreign investment in the future.

What else is worth mentioning? Probably the increase of highly and niche qualified IT specialists seeking for those outsourced positions. Cryptocurrencies, VPNs, new programming languages, iOS and Android developers, gaming developers and graphic designers of course. Representing an international company that has a stronger brand and/or pays well, takes care of its employees is a crucial factor that explains why Lithuanian IT specialists love to work in outsourced service centers.

What Happens with IT Outsourcing in the Rest of the World

The rest of the world sees very much untapped potential for further outsourcing. The trend sees more stable businesses opting for the time-tested and dependable solutions of nearshoring. Even though places like China and India remain the most significant players for outsourced IT solutions worldwide, this is just because of the sheer scale and numbers. When it comes to quality, proficiency and effectiveness, European, especially Eastern European countries, like Lithuania – prosper and stand out from the rest.

Current global trends dictate, and experts agree that there is going to be a significant increase in virtual or augmented reality spheres. AR, VR, and even the yet entirely unexploited 3D possibilities have much to offer for people all over the world. The market size is expected to become somewhere near 134 billion USD.

Manufacturing will, of course, be mostly outsourced to places like Asia. Outsourced will probably also be the sphere of customer service, some managerial functions amongst others. You might also look for someone to make a big splash and launch a near or fully automatized customer service or related outsourced location. Since the jump in AI has been significant over the past couple of years, results have to show very positive signs for businesses that would benefit from such a solution.

In Europe, upcoming years are going to be full of national elections. European Union and its policies also play a huge role, but they are mostly very supportive of foreign investment and IT sector development. Local elections could also cause some changes in the trends for the forthcoming years. IT outsourcing powerhouses like Poland, Ukraine, Lithuania, Russia, and many others have upcoming elections that could steer these countries into more encouraging fiscal policies directed towards foreign outsourced investment or the other way around. Time will tell, but for now – the trend is moving up!

Conclusion: Primary Advantages of Outsourcing IT Services in Lithuania

All in all, let’s sum up everything we have discussed and talked about to highlight the primary advantages of outsourcing IT services in Lithuania.

Are you thinking of outsourcing IT? We hope we proved that Lithuania is The place to Outsource. We will be glad to assist you.

Fill a simple contact form for a Free Consultation

We use cookies on our website to give you the most relevant experience by remembering your preferences and repeat visits. By clicking “Accept All”, you consent to the use of ALL the cookies. However, you may visit "Cookie Settings" to provide a controlled consent.
Cookie SettingsAccept All Reject All
Manage consent

This website uses cookies to improve your experience while you navigate through the website. Out of these, the cookies that are categorized as necessary are stored on your browser as they are essential for the working of basic functionalities of the website. We also use third-party cookies that help us analyze and understand how you use this website. These cookies will be stored in your browser only with your consent. You also have the option to opt-out of these cookies. But opting out of some of these cookies may affect your browsing experience.
SPARA OCH ACCEPTERA